How to configure Dual WAN on AsusWRT routers

As I work from home, it’s critical that I have Internet uplink 24/7. This is why I have both a cable line to my apartment, and also a backup ADSL line. In the past, when the cable line failed, I had to switch the wires, change the PPPoE login credentials, and then have no way to see if the cable line is fixed.

All of this was before I bought the Asus RT-AC56U router. The AsusWRT firmware supports something called “Dual WAN” - an option to have two Internet channels connected. Apart from the dedicated Ethernet WAN port, you can either plug in a 3G USB modem, or use one of the 4 LAN ports for a second WAN. In my case, I connected the ADSL modem to LAN.

Dual WAN works in two modes. “Failover” means using one of the connections, and when it’s down, switch to the other one. “Load balancing” means use both of the connections, specifying a load ratio that should correspond to the ratio of the channels’ bandwidth. Unfortunately, there’s no option to use the extra connection as a backup line, which is what I wanted initially - the router will stay on the backup line as long as it’s up.

After you enable Dual WAN, you’ll need to configure the second connection. This is the obscure part. In the “WAN settings” page, to edit the second connection’s settings, you have to change the “WAN type” select box to “LAN”. You might think the select box is part of the settings, but in fact it only changes the form’s appearance. Both connections store their own distinct configuration.

Think of this select as a tab bar

After enabling and configuring the second connection, you should see it on the Network map page in “standby” mode. If the primary connection fails, the router will use the second one.

The router can periodically check the primary connection and resume using it when it is up. This is called “fail back” mode. It can either check that the network interface is up, or ping a predefined IP address.

There’s no UI to toggle the active connection manually, but you can SSH into the router and use ifconfig vlan3 down; sleep 10s; ifconfig vlan3 up (the interface name might be different for you).

By the way, I picked this router out of the entire RT-AC* lineup because it stands up vertically, so Wi-Fi antennae are guaranteed to be upright: 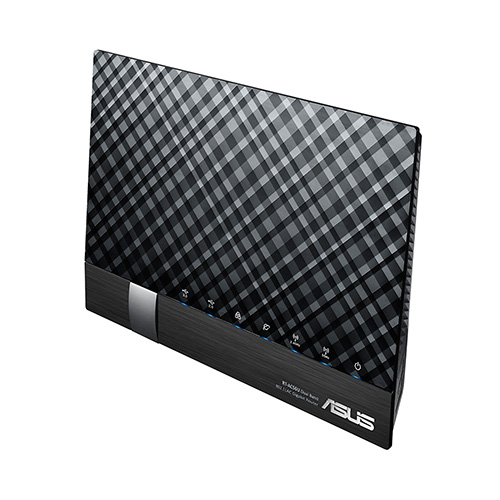